You are here: Home1 / hickory 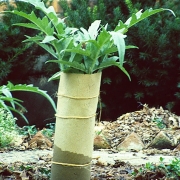 In this early part of the growing season, I’m frequently asked, “So what new and exciting plants are you growing in the garden this year?” And just as frequently, I can’t think of anything. Not that gardening isn’t “new and exciting” every year, what with the vagaries of the weather and pests, and their interaction with planting, pruning, and soil care.
Well, this year I can think of at least four new and exciting plants I’m growing.
————————————————
I actually have grown cardoon before, perhaps 25 years ago. And up until this weekend, I had no desire to ever grow it again. The plant is like a giant celery with spiny stalks that must be tied together so that they get blanched and edible. Or supposedly edible, once you removed the tough strings running down each stalk. Blanching and de-stringing was a lot of trouble, too much trouble for me considering the taste of what of the tough stalk after being cooked. 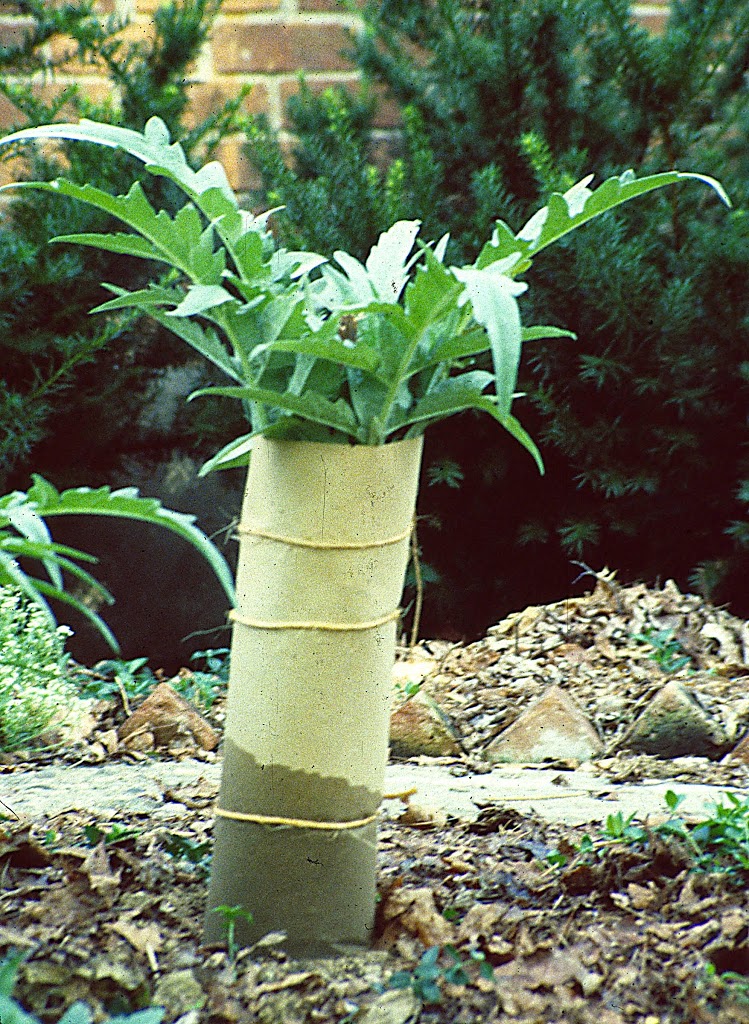 This weekend, two people at my grafting workshop digressed from grafting to wax enthusiastic over cardoon. Evidently, my problems 25 years ago were growing the wrong variety and cooking it poorly. I’m not sure if any varieties were available back then, but I was convinced to order seed of the suggested variety, Gobbo di Nizza (Hunchback of Nice), and will sow them in pots as soon as they arrive.
Once the weather warms reliably, I’ll plant out two or three small plants, giving them rich soil. Once the plants are three feet high, I’ll mound some soil or wood chips up around their bases and tie the leaves together to blanch them, then a few weeks later, cut down the four-foot-tall monsters for eating. I was told that they taste like artichoke, a close relative.
In warm winter regions, cardoon grows as a perennial. If winter’s were warm here, I’d plant cardoon even if they tasted awful. That’s because in their second year, they send up six-foot-high stalks capped with bottlebrushes of cerulean blue flowers that sit in an artichoke-y base. 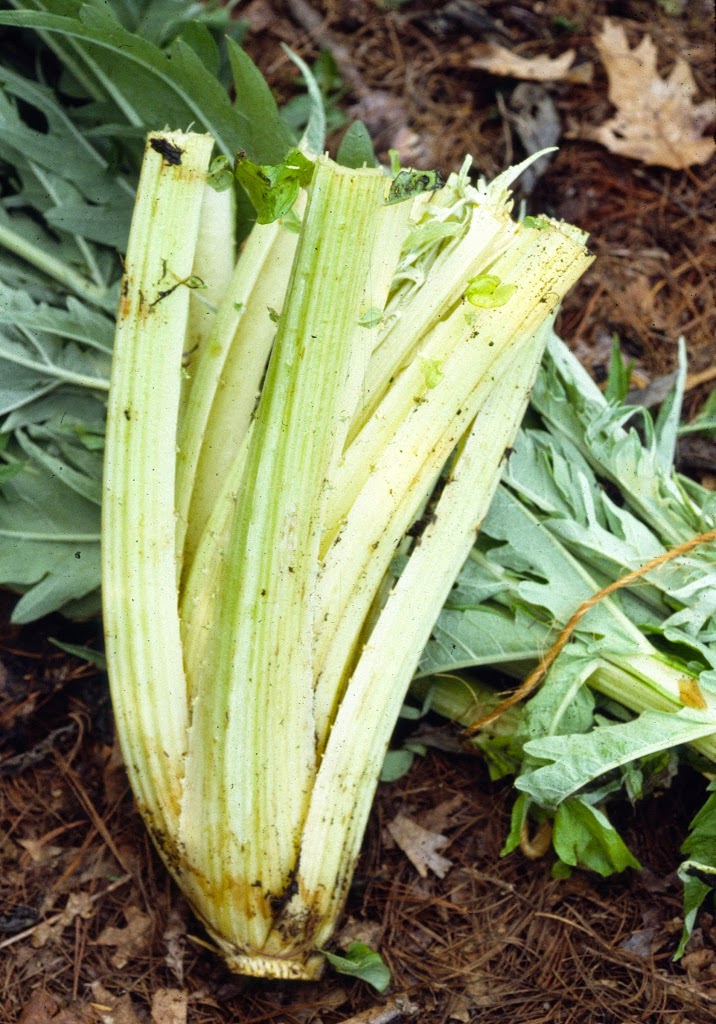 ————————————————
I’ve also previously grown — or tried to grow — the second of this year’s N&EP (“new and exciting plants”), King Red Russian olive. It’s a variety of Russian olive, native to Afghanistan, that, instead of bearing the usual innocuous silvery green fruits, bears bright red fruits. The fruits contrast nicely with the silvery green leaves — and taste pretty good.
For some reason, King Red doesn’t like our summer weather, probably the humidity. My plant of yore grew fine until sometime in July, when it collapsed, dead. Others in the humid East have had similar experiences. 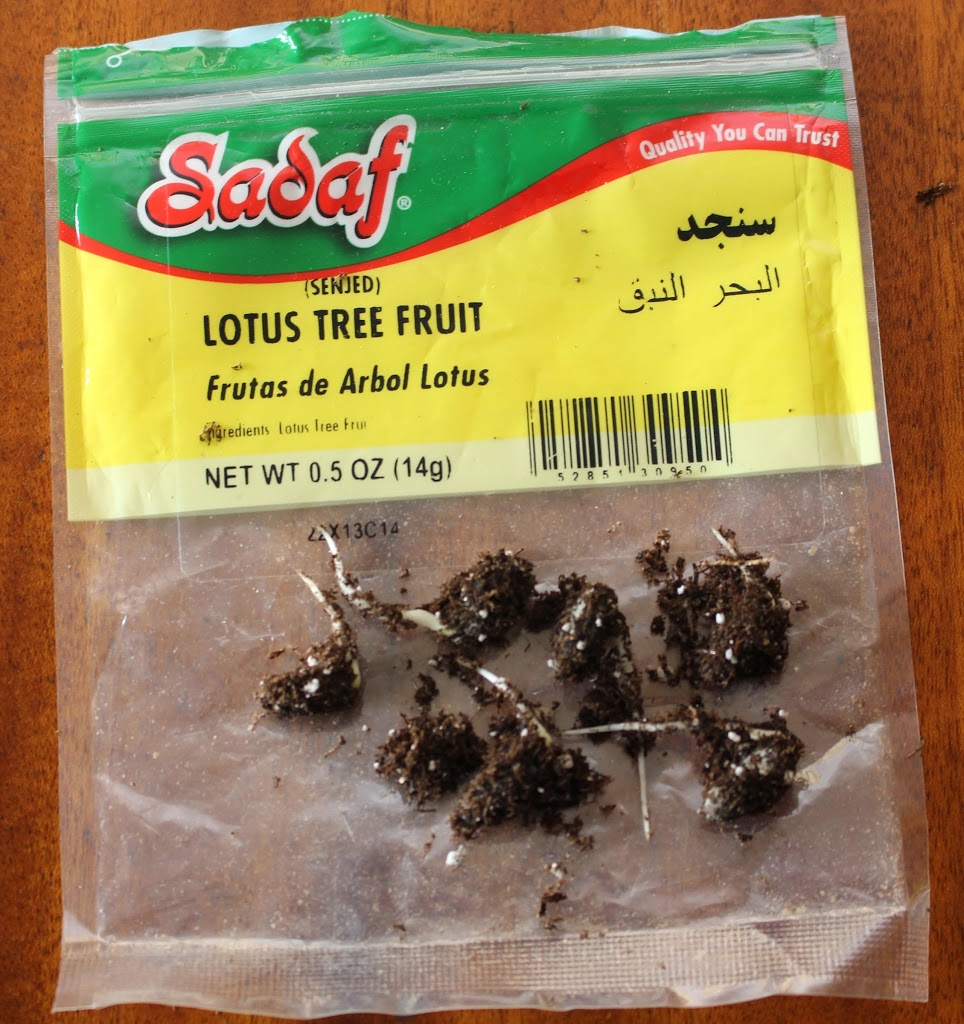 Out West, King Red, which was introduced as a conservation plant decades ago by the USDA, grows fine. Too fine, so that it is now listed as an invasive plant out there, along with regular old, green-fruited Russian olive. (Sometimes they are listed so in the East also, although they seem pretty sedate around these parts.)
I’m thinking that somewhere in the genes of King Red, which is a seed propagated variety, not a clone, might lie genes that can tolerate our summer climate. To that end, I got my hands on seeds left from a bag of imported, dried King Red fruits; I’ll sow them all and hope for the best. (I once tasted the dried fruits; they are like sweet talcum powder, enclosed within a brittle “shell.”) The fruits parade under a number of aliases: Trebizond date, lotus tree. Botanically, it’s Elaeagnus angustifolia var. orientalis. 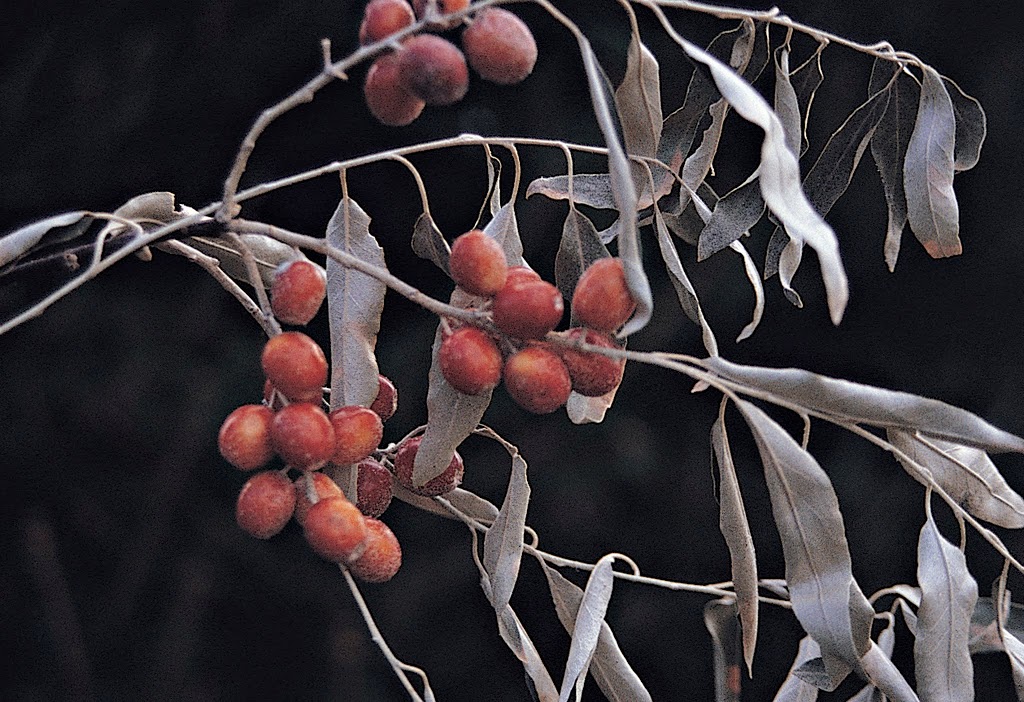 ————————————————
Another fruit, Ficus Afghanistanica, or mountain fig tree, is among my N&EP. With more than a half-dozen fig varieties in my not very fig friendly climate, you’d think I had enough figs. Mountain fig tree is worth a try for its hardiness, by some accounts to well below zero degrees F. Of less importance here in the humid East is its drought tolerance, which may be related and help with its cold hardiness.
Also on the plus side, the plant has decorative leaves, similar to common fig leaves except pointed at their tips.
On the negative, there’s some question as to whether this fig needs pollination, something most fig varieties do not need. If so, a special pollinator variety would be needed as well as some means to get the pollen into the eye of each fruit at the right time. A syringe filled with pollen? Figs that need pollination normally get their pollen with the help of Blastophagus, which are tiny wasps that, laden with pollen, enter the eyes of developing fruits to lay eggs and, in so doing, inadvertently pollinate the flowers within.
————————————————–
The buttery pleasure of eating hickory nuts is offset by the tediousness of cracking and shelling them. That’s shagbark hickories (Carya ovata), which are native throughout eastern U.S.
Shellbark hickories (C. lacinosa) have similar nut flavor and shape, except that they are two or three times larger, so you get more bang for your buck with each nut you crack. Walking just a quarter of a mile in any direction, I’d be likely to find some shagbark hickory nuts on the ground but nary a shellbark hickory. The latter species is found mostly along the Ohio and Mississippi Rivers, and bordering regions; nowhere, though, is it common.
So I ordered trees from Nolin River Nut Tree Nursery, and not just any old shellbark trees, but the varieties Simpson and Selbhers. Both are billed as heavy bearing and producing nuts medium to large nuts with excellent cracking qualities. Very “new and exciting;” I hope to enjoy the nuts of my labor in 5 to 10 years.
https://leereich.com/wp-content/uploads/2014/05/Cardoon-252C-blanching.jpg 1024 749 Lee A. Reich https://leereich.com/wp-content/uploads/2022/12/header-home-link-247x54-2.png Lee A. Reich2014-05-22 21:48:002014-07-14 15:16:01What’s New Farmdenly?