You are here: Home1 / growing grain 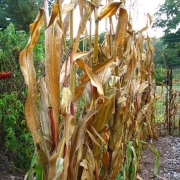 The problem with popcorn is that it “don’t get no respect.” Sure, it’s a fun food, nice to toss into your mouth while you watch a movie. But that’s been the case only since the 1930s.
Popcorn is a grain, a whole grain, as good a source of nourishment as wheat, rice, rye, or any other grain. Popcorn was among the foods brought by native Americans to the first Thanksgiving dinner. For anyone who likes the idea of raising their own grain, popcorn is a good choice. It’s easy to grow, it’s easy to process, and it’s easy to save seed from one year to the next. I grow two varieties — Pink Pearl and Dutch Butter-flavored — and have saved seed from my plantings for over 20 years.
Every year I plant two beds of popcorn, each bed 10 feet long by 3 feet wide. Growing popcorn is no different than growing sweet corn, except that you can plant a little earlier (early May around here) because 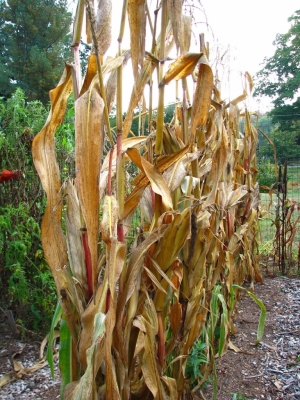 the lower sugar concentration of popcorn seeds make them less likely to rot and because the plants inhabit their beds pretty much the whole season. Popcorn, like any corn, needs good soil; all the beds in my vegetable gardens are moist and rich from drip irrigation and a yearly dressing of compost.

Popcorn and sweet corn need to be isolated from each other as does each variety of popcorn, if you want the varieties to remain pure. My popcorns grow in separate beds that are within 20 feet of each other so they do cross-pollinate a little, which is interesting. The sweet corn, though, is in a separate garden. Cross-pollination, in this case, would make for less pop-able popcorn and less sweet sweet corn.
I plant two rows of “hills,” or clusters of plants, down each bed, with 2 feet between hills and 8 seeds per hill. Once seedlings are up and growing, hills get thinned to the best four plants. Yields are about 36 to 72 ears of popcorn per bed (the Dutch Butter-flavored variety bears 2 ears per stalk), which translates to 6 to 12 pounds of popcorn per bed. We just finished off the end of last year’s harvest, so 12 to 24 pounds of popcorn is about how much Deb and I pop each year. (The average American consumes about 3 pounds of popcorn per year, in a movie theatre, of course.)
Besides offering the satisfaction of growing your own grain, popcorn-growing also lets you choose from a

number of varieties. They don’t all taste the same. An important commercial criterion is volume after popping. My popcorn does not puff up to great volumes, but the popped kernels have rich flavor.

We just finished snapping the dry ears from the stalks of this year’s crop, although there’s no rush to harvest popcorn. Processing entails nothing more than pulling back the husks and tying 2 or 3 ears together to hang and dry from the kitchen rafter. It looks very pretty.
————————————————————–
Months ago, I wrote about planting another grain, wheat. The plants grew nicely, ripening to a small amber wave in their corner of the garden before being harvested back in July. After hanging the cut stalks to dry for more than a month, I stuffed them in a pillow case and batted the pillow case around to knock the wheat berries from the stalks. No luck.
So I let the pillowcase full of stalks, seedheads, and grain sit another few weeks. This morning batted it all around some more. Too many berries still clung to the the seedheads. Popcorn is easier.
—————————————————————
Besides popcorn, another of my successful and satisfying home-grown grains is chestnut. Okay, it’s not really a grain. But chestnut is unique in being a nut that’s high in starch, just like grains. In many parts of

the world, the nuts are dried, ground into a flour, and used to make breads, pancakes, and other foods usually made with grain flours.

Like popcorn, chestnuts are very easy to grow. Just plant two trees. They grow fast, they bear quickly and reliably, and they have an attractive spreading form clothed with leaves that stay glossy green all season until they turn a rich brown color in autumn. The only caution is to avoid planting them where you’ll be frequently walking, playing, or sitting because of the spiny burs that drop with the nuts.
American chestnuts succumb to chestnut blight but there are plenty blight-resistant varieties, such as Colossal (slightly resistant), Eaton, and Peach.
Chestnuts are a lot easier to process than wheat. Just pick nuts up from the ground daily during their

2-week ripening period, let them sit a few days to cure, then slit and roast them — 450° F for 1/2 hour. The nuts can also be dried for grinding into flour. I may try that.