You are here: Home1 / Concorde pear 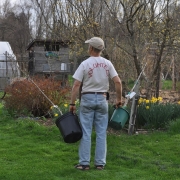 People are funny, and that includes gardeners. Gardening is basically simple: You put a seed in the ground and, backed by millions of years of evolution, that seed grows. Sure, there are a few more wrinkles, like choosing a sunny spot (for sun loving plants), a well-drained soil (except for bog and water plants), and enriching the ground with organic materials, and, perhaps, fertilizer.
But people love to complicate things. Hence, compost tea, biochar, and now, straw bale culture. A recent article in the New York Times about straw bale culture has everyone — or at least the handful of people who told me of their plans for the season — trying out this new and allegedly wonderful alternative to merely dropping seeds in the ground.
Actually, straw bale culture is not “new.” I wrote, over a decade ago, in my book Weedless Gardening, “Straw bale culture of vegetables originated in Europe from a need to grow plants where diseases had built up in greenhouse soils. The idea is to set a bale of straw on the ground and grow a plant right in the bale. You do this by poking a transplant into a hole gouged in the top of the bale and sprinkling some fertilizer on it. Given adequate water and nutrients, the plant roots grow throughout the bale, hardly realizing that they’re not in real soil. There’s no reason why this method could not be used to start a small garden anywhere. Put some paper down on the ground and create mulched paths between the bales.”
Yes, the method could be used “anywhere,” but there are also good reasons not to. First, straw bale culture is not really organic. With this method, plants are fed mostly by soluble fertilizers sprinkled on the bales. The essence of organic gardening is to feed the soil which, in turn, feeds the plants. Plant foods are released from the soil matrix through microbial action. Microbes respond, as do plants, to warmth and moisture, so nutrients become available to plants in synch with plant needs. In straw bale culture, roots are bathed in readily available nutrients whether they want them or not.
Barring diseased soil or trying to garden on a rock ledge, why use straw bale culture in the first place? What’s wrong with dropping a seed in waiting furrow in the ground?
—————————————————–
Not that I’m that rational a gardener, especially this time of year.
I’ve admonished many a person to begin with a site that needs a plant, determine what plant would do well with those site conditions, and then — and only then — to go out and get the plant or order it. All that’s

opposed to wandering into a garden center this time of year, when such places are awash with all sorts of desirable plants, picking out a plant you like, and then running around the yard with it trying to decide where to plant.

I, of course, did the latter. A couple of weeks ago, I read about Concorde pear, notable for having “the beautiful shape and crisp texture of the Conference, which gives it an elongated neck and firm, dense flesh. Its flavor is vanilla-sweet, reminiscent of the supple sweetness of Comice pears.” (Supple sweetness?)
The plant is readily available in Britain, but not here. All of which made it all the more desirable. Did I really need a Concorde pear tree? Aren’t the more than 20 varieties I now have sufficient? Evidently not.
As luck would have it, a nursery an hour away had Concorde. The nursery, of course, had  many other desirables also. So I also bought Black Gem, a named variety of black walnut. Not that there aren’t plenty of wild black walnuts around here, but this was a named variety.
So today I will run around the yard with these two plants trying to decide where to plant them.
—————————————————–
The appeal of Black Gem is that it has a name. A “named variety” of plant is one that was either bred or selected from a wild population and found to be superior in one or more ways. Said plant is given an official name and then reproduced by some method of cloning, such as by cuttings or, as is the case with most fruit

and nut trees, grafting. McIntosh is a named variety of apple. Seedling apple trees that pop up randomly along roadsides are not. All plants of the same variety name are genetically identical.

Named varieties are not available for every plant and, for some, pretty much all seedlings are quite good. The hedge of Nanking cherries along my driveway — and now in bloom! — are merely seedlings, but all the plants are beautiful and yield, in a couple of months, great quantities of tasty cherries with virtually no effort on my part. No varieties are available.
Black Gem, according to the tag, yields “huge crops of light-colored, high-quality, delicious nuts that crack in large segments and offer a superior nutmeat-to-shell ratio. Thin husks slip off easily.” How could I resist?
—————————————————–
https://leereich.com/wp-content/uploads/2013/05/Where-to-plant-253F.jpg 816 1024 Lee A. Reich https://leereich.com/wp-content/uploads/2022/12/header-home-link-247x54-2.png Lee A. Reich2013-05-10 09:52:002014-07-14 15:17:07Rational in Spring? No.