You are here: Home1 / botrytis 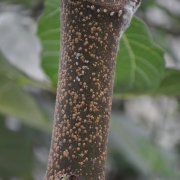 Lest anyone believe that everything is always rosy here on the farmden, it ain’t so. True, right now, vegetable beds are brimming over with crisp, tender heads of delicious lettuce, broccoli, endive, and cabbage, and upright stalks of aromatic celery and leek. And, yes, the floor of the greenhouse is verdant with developing, young lettuce, large, leafy kale and Swiss chard plants, and 10 foot tall fig trees bearing fruits

But let’s start with those figs, three different varieties of which live with their roots right in the ground in the greenhouse. Green Ischia has been bearing large, copper-colored, firm, sweet fruits for weeks and weeks. No problem here.
About 8 feet from the Green Ischia grows a Brown Turkey fig. It kicked off the season as usual, loaded with fruit that started ripening in early September. Then scale insects moved in, dotting stems and eventually the fruits with their gray bodies, and sucking the life out of everything until the harvest petered away to almost nothing
About 8 feet from the Brown Turkey tree grows another fig tree, Kadota, with fruits lined up along its stems also. From past experience, I expected problems with Kadota. It’s a delectable and heavy yielder that thrives in hot, dry climates. The greenhouse is hot but hardly dry. With the high humidity in there, almost every Kadota fig has turned to a fuzzy, white ball just before ripening.
——————————
The Kadota problem is the one most easily solved. That white fuzz is fungal, and the fungal culprit is probably Botrytis cinerea, a cosmopolitan fungus boasting a slew of host plants. Botrytis claims credit, for example, for a wet spring’s fuzzy, gray strawberries, for a wet summer’s fuzzy, gray raspberries, and, in a more benevolent form, for “noble rot” of grapes, which makes for a sought-after wine. All sorts of ominous chemicals can control botrytis. More benignly, on stored fruits at least, it has been controlled with a 1% solution of baking soda, or an atmosphere of either 15 ppm acetic acid (i.e. vinegar) or 75 ppm cinnamaldehyde, the natural flavoring of cinnamon
Trying to control disease on my Kadota figs with sprays would be an uphill battle considering the perfect conditions for botrytis: a very susceptible variety of fig, a very humid environment, and presence of the fungus. My approach is straightforward, and that is to dig up Kadota and plant a more disease-resistant variety in its place 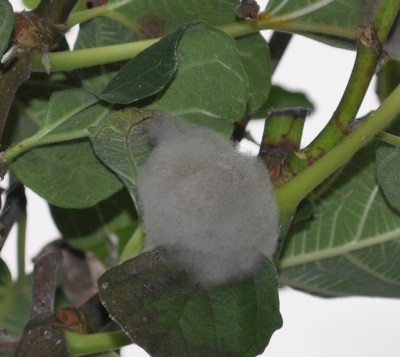 On to Brown Turkey . . . Scale insects get up into plants and move around with the help of ants. Stopping the ants goes a long way to putting the brakes on scale. Stopping the ants is easy: Masking tape wrapped around the trunk and coated with a continuous ring of sticky Tanglefoot Tangle-Trap Insect Trap Coating. I also, of course, have to make sure there are no leafy, stemmy, or other bridges around which ants can detour. Next year
One other possibility for reining in scale insects is to spray “summer oil” in spring after the plants have leafed out and greenhouse beds are clear of lettuce, kale, and other vegetables. Summer oil is highly refined so as not to damage plants while it’s smothering the scale insects.
————————————————
Another problem I notice in the greenhouse is that developing lettuce heads have some hole-y leaves and a few gobs of insect poop. Slugs are the usual, occasional problem in my greenhouse, but they don’t leave green, gobby, poopy calling cards. (No less unpleasant are the silvery trails they do leave, from their dried slime.) With more than usual grasshoppers this year, that was also a possibility. Nix on that. I just haven’t seen enough of them for all that poop, and they chew beginning at the edges of leaves. Attacked lettuce leaves were pocked with holes

The feeding resembles the handiwork of cabbageworms or cabbage loopers. They’ve never before indicated a liking for my lettuce but are known to include lettuce in their diet. Yet another possibility is another caterpillar, armyworm. This one feeds at night and, because I haven’t seen any caterpillars, is now the most likely culprit
The natural insecticide, Bt (sold under such trade names as Dipel and Thuricide), that I mentioned last week is very effective against the cabbageworms and loopers, as well as young armyworms. Larger armyworms are finished or just about finished feeding anyway.
——————————————–
These few problems notwithstanding, things are still rose-y, or at least carnation-y, in the greenhouse. The big, fat, fragrant ‘Enfant de Nice’ carnations that I grew this summer . . . well, I couldn’t just leave them out to die from cold. So I dug up some plants to grow in the greenhouse. They add a nice spot of red, white, or pink color, and the fragrance is, as billed, “intoxicating spicy-sweet clove.”
————————————————-
https://leereich.com/wp-content/uploads/2012/11/Scale-on-fig.jpg 1024 680 Lee A. Reich https://leereich.com/wp-content/uploads/2022/12/header-home-link-247x54-2.png Lee A. Reich2012-11-16 06:50:002014-07-14 15:17:39THINGS NOT SO ROSEY