You are here: Home1 / Gardening2 / [first strawberries, chickens fenced out]

This year’s berry season officially began, on May 22nd, with the first harvest of strawberries. As with everything else in this year’s garden, the strawberries are early. Looking over my records, I see that in years past, I had to wait until early or even the middle of June to pluck the first glistening, red orbs of the season. 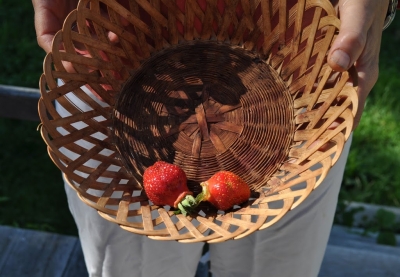 Those first berries are particularly welcome. First of all, they are the first fresh fruit from the garden. (Not that I haven’t been eating berries: We still have plenty of blueberries, still frozen and, when thawed, still delectable, from last summer.)

The first strawberries of the season also are particularly welcome because they are always the biggest. Every strawberry stem ends in a single flower, which is the first one to open. About thirty days after opening, if all goes well, that flower has been transformed into a ripe strawberry.

Every strawberry stem also has two branches and each of these also terminates in a flower. Secondary flowers open after the first flower. Those secondary stems likewise each has two branches terminating by a flower, opening even later. There might even be a fourth set of branches, with flowers, on these last stems.

If you were to dissect strawberry flowers under a microscope, you’d find that that there are most female flower parts, which are what swell to comprise each juicy berry, in that first flower, fewer in the two secondary flowers, and so forth, so the berries generally get smaller as the season progresses.

Opening first, the biggest flower is also most susceptible to late frost injury. Fortunately, I remembered to throw a blanket over the strawberry bed to protect the flowers during the two frosty nights earlier in May.

Now it’s time to throw a net over the bed to fend off birds. Those metal hoops that covered some vegetable beds to support clear plastic for cold protection also work well as supports for netting. That first harvest of the 22nd was only two strawberries. Just a few days later, we were, and are, picking bowlfuls of berries, which the birds won’t want to share.

I’ve previously praised backyard chickens for their eggs, for their patrolling of the grounds to keep insect pests in check, and for their decorative effect on the landscape. Benefits aside, I do spend some effort corralling them into or keeping them out of parts of the yard.

Chickens scratch for food, in so doing generally messing up planted ground, even damaging some plants as they keep scratching soil away from their bases. Hence, chickens are never allowed in my vegetable gardens, something they seem to appreciate even though they could easily fly over the 3-foot-high fence around one of the gardens. The chicken’s scratchings are also limited by their being “bantam chickens,” never taller than a foot or so and thus limited in their scratchabilities.

Just a little fencing dissuades chickens – my chickens, at least – from entering an area. Bamboo stakes (another use for my bamboo) three inches apart and sticking a foot-and-a-half out of the ground decoratively and effectively have kept the birds out of one portion of the garden for years. This fencing only lasts a couple of years and becomes tedious to replace over a large area, though.

I’ve upgrading chicken fencing now to “welded wire” fencing with 2 by 4 inch openings. I cut a 36 inch wide roll in half for 18 inch high fencing, which I support with a bamboo stake every few feet. So far, after a few weeks, the chickens have only gazed longingly within but never hopped over it. Over the past couple of weeks, 7 baby chicks have hatched. The chicks have no trouble strolling right through the openings of this new fencing. Their scratchings are inconsequential.